My Third Holiday in Poland - Zakopane 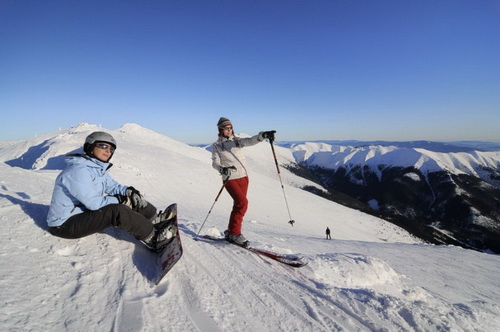 What a great but strange country, Poland. The first time I went to Poland I spent a week in the summer hiking in the Tatras mountains near Zakopane. I never knew mountains were so big or so steep, I came back with aching muscles sore knees a suntan and 3 kgs lighter. The second time I did the touristy thing and went around Warsaw, Krakow and Lodz (pronounced woodge).

Now my third time I thought I should write about it as once again I have come back with aching muscles, sore knees but only about 1kg lighter this time. A group of us spent New Years in Zakopane, tired of the disappointing London New Years Eve celebrations, where I always seemed to expect a huge party and it never seemed to quite materialise, so we decided to try Poland.

Absolutely wicked except for me on the first day, walking down the high street I saw a number of people running and sliding along a long ice patch in the middle of the closed off road. It looked a lot of fun so I decided to try it out. Watch me everyone I shouted running up and stepping onto the ice slide. It was over in less than a second, my feet flew up from under me and I landed hard on my back and head. It was like being on a hospital trolley as I looked up and saw the Christmas lights flashing overhead as I continued sliding. The whole street burst into laughter and were clapping and cheering. My hands were still out in front of me, put there to balance myself, so someone slapped my hand in friendly cameradie as I slid past him. Next time I wear skates.

We had booked into a restaurant (+-?40-?60) for New Years Eve and at 7pm our evening started by being presented with a half jack of vodka in a specially engraved leather pouch to hang around our necks. We were then herded in to sleighs to do the Jingle bells thing... in a one horse open sleigh... and off we flew singing songs sipping vodka and carrying flaming torches.

The sleighs dropped us off in the forest next to a huge bonfire where we were given Polish Mountain Tea (tea with a double shot of something called Spirytus, 90% proof) which was very good and warmed us up as the snow was falling all around us. Polish sausages on a stick were then handed out and we cooked them on the fire while Polish songs were sung by those who knew the words. A very merry and friendly crowd it was. The sleighs picked us up again and off we went to the restaurant where we spent the night eating, drinking dancing, drinking, talking and drinking. We sat at a friendly table of 10 with six bottles of vodka to start off and with plenty of Cheers being said by everybody which meant you had to down a double shot.

When we left at 3:30 in the morning, they were still serving food and drink and the place was packed.

The rest of the week we spent ice-skating next to the mountains and then skiing and snowboarding. I refused to give up on Snowboarding so three days later I could stand up and go down the beginners slope but by that time I was in too much pain to enjoy it with black bruises on my knees, a tender bum and stiff and sore muscles everywhere I decided to call it quits and we headed off to the nearest café for some Tea and Cherry Vodka.